An introduction to the underlying science of gaining muscle

Going to the gym is a staple in the routine of many. Lifting weights is not only an excellent physical exercise but also a therapeutic stress-reliever and an opportunity to mentally disconnect. After training, eating and resting properly, it is reasonable to expect satisfying muscle gains; however, the underlying mechanism of this is often overlooked. Muscle hypertrophy refers to the process of gaining muscle and understanding the science behind it could benefit your progress in the gym. While muscle hypertrophy is a complex phenomenon involving elaborate signalling pathways and physiological processes, let us first tackle the basics: how and why does it happen?

Skeletal muscle cells, or myocytes, are long fibres packed with strands of protein called myofibrils. These myofibrils are composed of actin and myosin proteins, arranged into contractile units called sarcomeres. Individual myocytes are not often replaced in life, so they require an efficient mechanism of cell repair. This is accomplished by balancing muscle protein synthesis (MPS) with muscle protein breakdown (MPB). Hypertrophy, simply put, happens when MPS exceeds MPB, so that the size and number of protein filaments increase and the extracellular matrix expands to support them. A high protein diet and an overload stimulus, such as a resistance training programme, drive hypertrophy by forcing the muscle to adapt and grow, usually increasing the number of both sarcomeres and myofibrils in each myocyte.  It should be noted that skeletal muscle fibres differ in composition and hypertrophic potential. For instance, type II muscle fibres, also known as fast-twitch fibres, are responsible for fast, explosive movements and have the highest hypertrophic potential; this is why, in a nutshell, lifting weights gets you big and not running marathons. 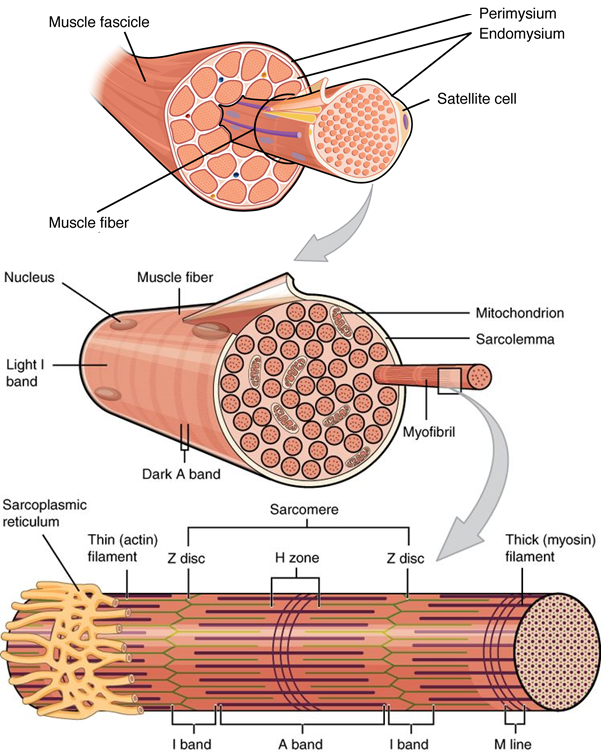 The skeletal muscle in three layers of depth: the muscle fascicle, the muscle fibre (myocyte) and the myofibril.

Three factors kickstart muscle hypertrophy, each of which has a distinct role in triggering the cascade of muscle-producing events. The least debated of them is mechanical tension. It is believed that the tension the muscle is subject to during concentric contractions (applying force to lift the weight) and/or eccentric contractions (applying force when lowering the weight) is essential for hypertrophic adaptation. Mechanical tension is typically associated with lifting heavy weights as it requires more force to be applied. However, this is only a part of the puzzle; resistance training programmes that have high degrees of mechanical tension appear to benefit strength gains and neural adaptations but not muscle gains. This is when the next two factors ‒ metabolic stress and muscle damage ‒ come into play.

When using lighter weights and/or decreasing the rest intervals between working sets, the body relies more heavily on anaerobic glycolysis because oxygen availability is limited and energy is needed quickly. This causes metabolites such as lactate, hydrogen ions and inorganic phosphate to accumulate, creating metabolic stress. Our understanding of the need to increase metabolic stress to maximise muscle gains comes from strong evidence amassed over the last 25 years. Additionally, traditional bodybuilder-style routines cause large amounts of metabolic stress. Therefore, it is of relative consensus that hypertrophy is maximised by finely balancing muscle tension and metabolic stress, which usually means working with moderate loads and moderate rest intervals. A prototypical recommendation is the 6-12 repetition range and the 60-90 second rest interval, but this is not absolute nor exclusive.

The third initiating factor, muscle damage, is still contested. It refers to the exercise-induced disturbance or rupture and subsequent inflammation of muscle that is not the result of an injury. The reason for studying muscle damage in the context of hypertrophy relates to our knowledge of the other two factors. If mechanical tension is applied while maintaining moderate loads and rest periods (metabolic stress), lots of muscle damage can be generated. Therefore, could it be that muscle damage itself is the direct promoter of hypertrophy? A relatively recent review on the topic argues against this. When subjects first start on a resistance training programme, not much growth happens, despite muscle damage being very high. This is because the increase in MPS is directed towards repairing rather than growing the muscle, and is not until a few weeks later that hypertrophy takes over, when muscle damage is lower. In addition, the fact that there is evidence of similar hypertrophy from programmes that induce different amounts of muscle damage might indicate that it is not central to muscle growth. However, it is almost undeniable that intense training generates at least some amount of muscle damage and, since it is involved with important hypertrophic mechanisms, whether it is necessary or not is still up for debate.

After muscle is stimulated, a cascade of cellular and molecular events takes place to produce muscle growth. Satellite cells, a type of muscle stem cell, play a particularly important role in hypertrophy and muscle repair. They secrete proteins called regulatory factors that promote MPS at the DNA level, creating more muscle. They can also donate nuclei to muscle fibres, amplifying the capacity of the myocyte to synthesise contractile proteins. This is important as a limited number of nuclei will only grow the fibre to an extent; past a certain point, more nuclei are needed to keep growing.

Multiple signalling pathways are involved in the hypertrophic response to weight training. The Akt/mTOR pathway is considered the central regulatory network of muscle hypertrophy, signalling both to promote MPS and inhibit MPB. Other pathways that are linked to hypertrophy include Ca2+-dependent pathways ‒ such as calcineurin-dependent signalling ‒ and the MAPK pathway. Hormones are also a big part of the hypertrophic response, the most important ones being insulin-like growth factor (IGF-1), testosterone and human growth hormone (HGH). They all promote hypertrophy in different ways and interact with other mechanisms such as with satellite cells and signalling pathways.

An additional mechanism that is often overlooked is cell swelling. When carrying out exercise that relies heavily on glycolysis, water is drawn into the myocyte through osmosis. Fast-twitch fibres, the type that is mostly responsible for hypertrophy, are especially sensitive to osmotic changes. The influx of water causes the cell membrane to stretch and the cell to increase in volume, which is why your muscles can look bigger after weight training. This effect may also interact with cell signalling pathways to potentiate protein synthesis. Moreover, the acidic environment created by the accumulated metabolites may also contribute to hypertrophy.

Clearly muscle hypertrophy is a complex process, but an appreciation of the factors that cause hypertrophy is useful for lifters who seek to maximise their results. Our current picture of hypertrophy is still lacking and research into its initiators and underlying mechanisms is ongoing. However, having some understanding of what goes on in our bodies during and after weight training will hopefully encourage you to approach your next workout with more scientific insight.

Is There a Minimum Intensity Threshold for Resistance Training-Induced Hypertrophic Adaptations? (Sports Medicine)