“The earth is healing itself, humans are the real disease” ‒ a sentiment widely shared and, in turn, widely mocked, following the widespread social distancing and lockdown orders put in place after the outbreak of COVID-19. A Twitter account claiming to belong to a regional branch of the environmental activist group Extinction Rebellion shared a tweet echoing this message.

This was met with backlash from other Extinction Rebellion members and environmental activists, accusing them of both spreading harmful ecofascist rhetoric and being a fake page with no actual affiliation to Extinction Rebellion. The tweet has since been deleted and the account was suspended. However, the fact remains that whoever posted it was not alone in their opinion, nor in voicing it ‒ the opinion that COVID-19, or a deadly global pandemic in general, is necessary to reduce the human population and save the earth. This is a core tenet of ecofascism. Many people have shared images and videos showing the earth apparently ‘healing itself’ due to the lack of human presence – water looking cleaner, animals occupying areas usually populated by humans, air seeming less polluted. 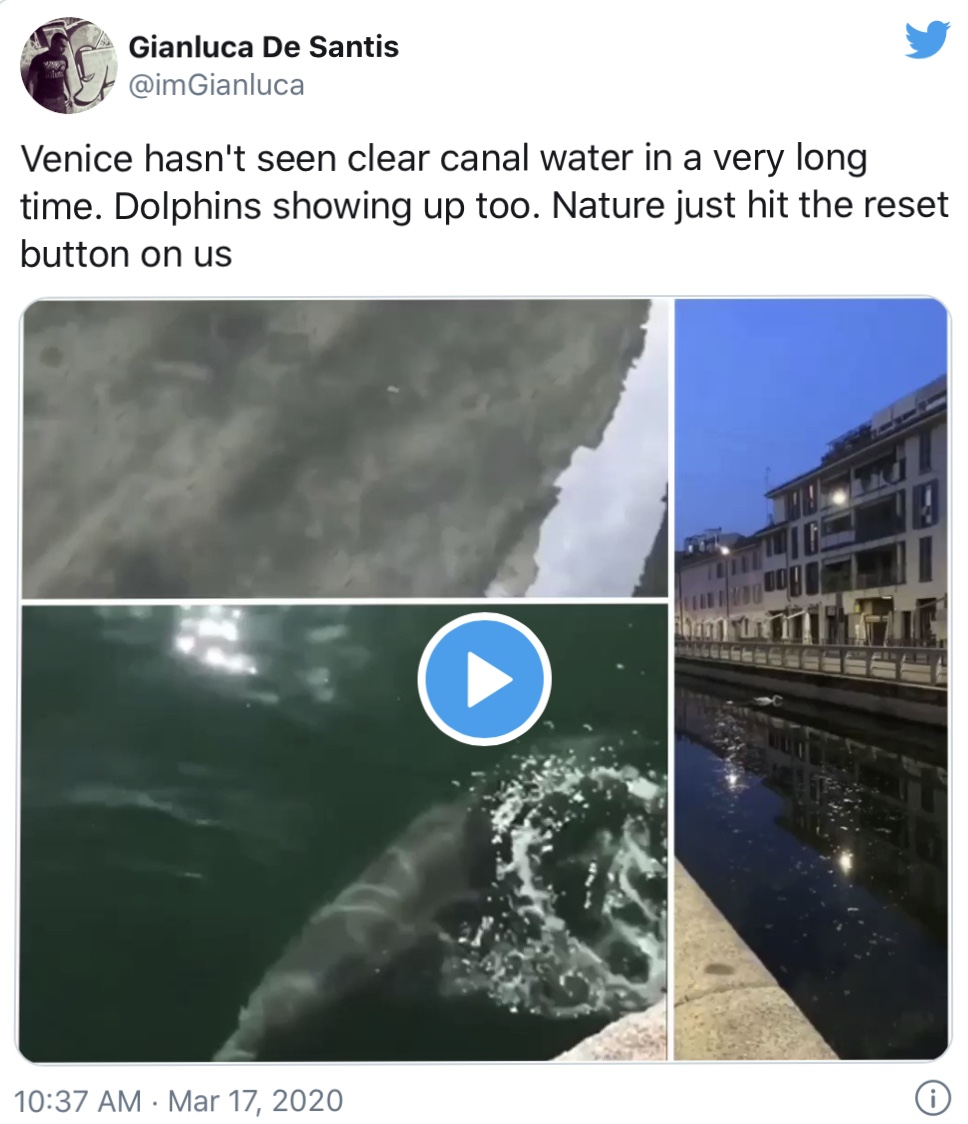 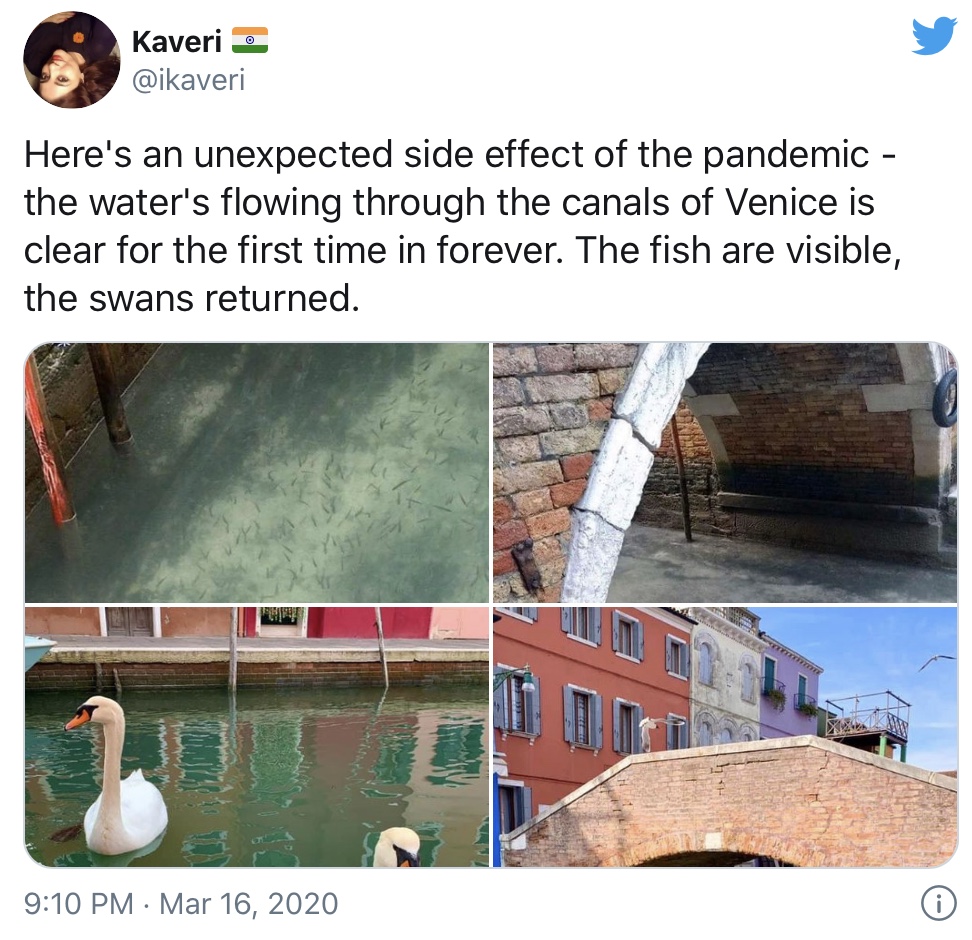 Many such reports of flourishing wildlife, some of which went viral, have since been debunked. It was quickly pointed out that a lack of boat traffic will inevitably lead to clearer-looking waterways, simply because sediment has settled and is not being repeatedly disturbed. “Nature is healing, we are the virus” even became a meme ridiculing those who made exaggerated claims about the environmental benefits of the pandemic. However, the idea that humans are a blight on the planet and need to be culled or eradicated is not a harmless new fad, to be poked fun at and ignored. Ecofascists have been propagating the same idea for decades ‒ that genocide is the only way to protect the earth. While this is obviously horrific, ecofascism does not always come across as the fascist, genocidal ideology that it is. Many perceive it as simply a more militant branch of environmentalism, rather than any kind of organised political movement. In some cases, well-meaning environmentalists unwittingly use ecofascist rhetoric without considering what they are really advocating.

However, ecofascism, as an ideology, is a branch of fascism in its own right and is no less harmful than any other kind. This is best exemplified by the 2019 Christchurch and El Paso shootings.

The Christchurch shooter described himself in his manifesto an “ethno-nationalist eco-fascist”. Both he and the El Paso shooter published manifestos before the shootings, in which they espoused typical ecofascist rhetoric relating to immigration (describing it as “environmental warfare”) and overpopulation of non-Europeans (“an assault on the European people”). They also featured Nazi refrains like “blood and soil”, which glorifies the supposed connection between German land and those with ‘Aryan blood’, and calls for a return to traditional, rural life. These featured alongside many other page-long racist tirades, the environmentalist argument clearly being exploited to vindicate the shooters’ bigotry and hatred.

It bears reminding that the Christchurch shooter targeted a mosque, and the El Paso shooter was believed to be specifically targeting Hispanic people (speaking of a “Hispanic invasion” in his manifesto).

It is abundantly clear which groups of humans these men are willing to sacrifice when they call for humans to die in order to protect the planet ‒ and that they do not believe in protecting the environment for its own sake. Instead, their goal is to preserve the earth for the people they believe it belongs to – white Europeans, or those of such descent. It is for this reason that much of the discussion surrounding the perceived environmental benefits of the COVID-19 outbreak is so harmful – not just because it is callous to applaud the perceived environmental benefits of a disaster that has killed thousands of people, but even more so because it perpetuates an ideology in whose name millions have already been violently murdered.

The arguments posed by these fascists, as well as being openly hateful, are plainly disingenuous. India, a country with a population of over 1.3 billion ‒ almost 20% of the world population ‒ only contributes around 7% of global CO2 emissions. While having a population four times larger than the US, it produces less than half as much CO2. In addition, a report by Oxfam found that the richest 10% of people produce half of the earth’s fossil fuel emissions. Clearly, then, population size is not the biggest determining factor in environmental harm, and a lethal global pandemic would not be a functional solution even if we did find it morally acceptable. Instead, it would be the poor and disadvantaged ‒ the ones who actually contribute the least to environmental damage ‒ who would suffer and die en masse due to inadequate and inaccessible healthcare and resources.

Genocide is not the solution to environmental destruction. The only solution is to push every day for a more sustainable way of life for everyone on the planet ‒ and the COVID-19 crisis can teach us some lessons in that regard. If there is anything to be taken away from the cleaner air in some cities that can be attributed to a decrease in vehicles on the roads, it is not that the air would be cleaner if humans ceased to exist. Instead, we should prioritise using and improving more environmentally friendly modes of transport. If lockdown-related changes to our way of life have led to temporary environmental improvements, then we need to be careful not to get caught up in rhetoric that implies humans ourselves are inherently the problem. Instead, we should look at the way we live our lives. Change to the largest degree needs to be enacted through lawmakers and large corporations prioritising environmental health over profit.

A common ecofascist argument is the lifeboat metaphor: the earth is a lifeboat that can only support a limited number of people, with many others in the sea trying to climb aboard. To quote Pentti Linkola, “What to do when a ship carrying a hundred passengers suddenly capsizes and there is only one lifeboat? When the lifeboat is full, those who hate life will try to load it with more people and sink the lot. Those who love and respect life will take the ship’s axe and sever the extra hands that cling to the sides.” But, in actuality, if the earth truly is a sinking boat, it is a boat we are all already on. In this scenario, who is it who truly loves and wants to protect life: the people at the top, pushing those already sinking into the water to protect themselves? Or those who put in place a solution to keep everyone afloat? The real question remains – if you are willing to kill people to protect the Earth, who are you really protecting it for?